You are here: Home / Uncategorized / Does California Law Give an Employee the Right to Be Accommodated to Assist Someone who is Disabled? 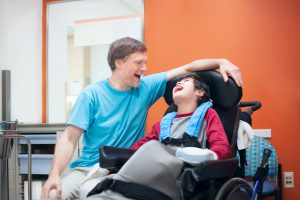 In the recent case of Castro-Ramirez v. Dependable Highway Express, Inc.[i](“DHE”), Mr. Castro-Ramirez (“Plaintiff”) had been allowed to work a schedule as a driver that allowed him to administer daily dialysis treatment to his son for kidney disease. He was the only one trained in his family to provide this treatment. Mr. Castro-Ramirez and other drivers had shifts that varied in start and end times. For years, his supervisor, Winston Bermudez (“Bermudez”), let him take shifts that started early enough for Plaintiff to be home in time to treat his son.

But a new supervisor, Boldomero Munoz-Guillen (known as “Junior”) replaced Plaintiff’s former supervisor, who became Junior’s manager. Junior wanted Plaintiff to work a shift one day that interfered with his son’s scheduled dialysis treatment. Consequently, Plaintiff could not work the shift because he had to care for his son and he told Junior he could not work that shift. Junior terminated him for not working the new shift. The new supervisor could have scheduled Plaintiff for an earlier shift so that he could provide his son with dialysis treatment that day but Junior scheduled other drivers to take those earlier shifts.

Plaintiff sued for various disability discrimination related claims under California’s Fair Employment and Housing Act (“FEHA”), including discrimination for being associated with a disabled person.

Mr. Castro-Ramirez lost at the trial court level on a summary judgment motion, but the California Court of Appeals reversed summary judgment on four causes of action – discrimination for associating with a disabled person, retaliation for exercising his rights under FEHA, failure for DHE to prevent discrimination, and wrongful termination in violation of public policy.

Discrimination for Associating with a Disabled Person

On an issue not decided by the Court of Appeals, DHE argued that FEHA does not state that an employer is required to accommodate anyone other than an employee or an applicant for employment. It cited a section of FEHA, Government Code §12940(m)(1), which states that “it is an unlawful employment practice: … For an employer or other entity covered by this part to fail to make reasonable accommodation for the known physical or mental disability of an applicant or employee.” [emphasis added] The Court of Appeals said that this part of the code cannot be read in isolation from the other parts of FEHA. It mentioned Government Code §12926(o) which defines various characteristics, including a physical or mental disability as including “a perception that the person has any of those characteristics or that the person is associated with a person who has, or is perceived to have, any of those characteristics.” [emphasis added] Therefore, being associated with a person with a disability is handled as a disability under FEHA. The court understood the combination of these code sections to mean that “subdivision (m) may reasonable be interpreted to require accommodation based on the employee’s association with a physically disabled person.” But this issue was not part of the appeal because the plaintiff abandoned his reasonable accommodation cause of action on appeal.

The Court of Appeals used this same rationale, however, to say that FEHA supports a discrimination claim based on association with someone with a disability. “By express terms, the two pertinent sections of FEHA make it unlawful to ‘discharge a person from employment’ (§12940 subd. (a)) based on physical disability and other characteristics or that the person is associated with a person who has, or is perceived to have, any of those characteristics.” (§12926, subd. (o).)

DHE further argued that its motion for summary judgment should be upheld and that Plaintiff should lose on appeal because there are no triable issues of fact concerning discriminatory motive or pretext. But the Court of Appeal found ample evidence to support that Plaintiff’s association with his disabled son was a substantial motivating factor for Junior to terminate his employment. Junior scheduled Plaintiff for a shift that he knew Plaintiff could not work because it would prevent him from treating his son. Earlier shifts were available that day for Plaintiff to work but Junior gave those shifts to other drivers.  Plaintiff had previously asked Bermudez to inform Junior of the shifts he could work so that he could treat his disabled son.  Plaintiff had told Bermudez that Junior was scheduling him for later shifts than he had before and Bermudez reminded Junior to schedule Plaintiff so that he could treat his son. A customer asked Plaintiff why he was not delivering on his normal earlier shift. Junior had falsely told Plaintiff that the customer did not like his work and when Plaintiff told the customer this, the customer said that was not true. It appeared that by scheduling Plaintiff for later shifts, Junior had engineered a situation compelling Plaintiff to say he could not work a shift, giving Junior reason to terminate Plaintiff and DHE’s Human Resource manager said that refusal to work a shift for any reason was grounds for termination.

The Court of Appeals determined, “A jury could reasonably find from the evidence that plaintiff’s association with his disabled son was a substantial motivating factor in Junior’s decision to terminate him, and furthermore, that Junior’s stated reason for termination was a pretext.”

Concerning retaliation, the Court of Appeals said that there was sufficient evidence that Plaintiff complained about unlawful conduct. “The trier of fact could reasonably find that plaintiff’s repeated complaints to Bermudez and Junior about the change in his scheduling when both knew that he needed earlier hours to administer dialysis to his son, constituted opposition to the denial of an accommodation in his schedule. Put otherwise, plaintiff showed opposition to a practice he believed was unlawful (§12940, subd. (h))…. He need not have used the terms ‘unlawful’ or “reasonable accommodation’ themselves. Even assuming FEHA did not actually require DHE to reasonably accommodate plaintiff based on his son’s disability, plaintiff’s good faith belief that DHE was acting unlawfully was sufficient.”

This case is a victory for plaintiffs, as it helps define the meaning of discrimination by association with a disabled person. The Court of Appeal confirmed that associating with a disabled person is protected and that when it comes in the form of requesting a schedule to allow time off to help a disabled person, adverse action by an employer to that request could be discriminatory under FEHA. It could also be retaliatory (and illegal) if the employee reasonably and in good faith believed that he was opposing an illegal practice by his or her conduct and communication.  However, the dissenting opinion in the case raises four arguments why they think majority opinion is flawed. Included in the dissenting opinion is disagreement that California should deviate with federal case law on the issue of associational disability discrimination and the dissent asserts that unless there is a duty for an employer to adjust the work schedule of an employee to accommodate the needs of a disabled associate, the employer is not discriminating against the employee when it assigns a shift that does not meet those needs and terminates the employee for refusing the assignment.

This decision leaves some doubt about future similar situations and how courts may interpret the law in those situations.  Also, doesn’t this decision now provide another means for an employee to get time off (or an adjustment to their work schedule) to care for a disabled person they are associated with other than through existing laws such as the Family and Medical Leave Act, the California Family Rights Act, the Kin Care law (Labor Code §233), and California’s Paid Sick Leave (“Labor Code §245, et seq.”)?

[i]Castro-Ramirez v. Dependable Highway Express, Inc. (filed August 29, 2016) 2 Cal.App. 5th 1028
___________________________________
This Newsletter is intended to only provide general information concerning the law and possible interpretations of the law. Nothing in this website should be construed as providing legal advice to anyone or any entity for any particular situation or purpose and no arrangement for such or for representation has been made by viewing this Newsletter.